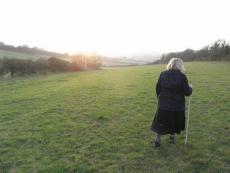 The 'Translucence' series serves as a reflection on the fragility of life, investigating Waterman's experience of mourning and loss. The collection of moving image works, 'February', 'Against' and 'Wisdom', interpret three instrumental tracks from Donna McKevitt’s musical score, 'Translucence' (Warner Classics, 1998), based on Derek Jarman's writing.

‘February’ (2011) traces the artist’s catamaran sea journey to the Isle of Wight to attend the funeral of a family friend, who suddenly passed away at the age of 44. The passing seascape becomes representative of her confrontation with loss, ending with the shadowy depths of the pier, which operates as a visual metaphor for the ceremony that lies ahead.

'Wisdom' (2013), is a stop-frame animation sequence that uses digital snapshots taken over a three year period from Easter 2010 to Easter 2013. The work documents Waterman's familial relationships, together with the changing seasons, to create a sense of time passing, with rituals being re-enacted and return visits to the same locations, in particular, her Mother's home on the Isle of Wight.

'Against' (2014) plays with the perception of family memory through a series of repetitive gestures, performed by the artist in response to Mckevitt's score. The desire for attachment, coupled with an unsettling sense of separation is implied as Waterman attempts to embody the projected images she took of her grandmother, just before she died twenty years ago.

The accompanying series of twenty image/text photographs elaborate upon the theme, drawing upon Jarman's books, 'Chroma' (1994) and 'Smiling in Slow Motion' (2000), together with literary quotations sourced from works by Kate Chopin, Emily Dickinson, T.S Eliot, Sylvia Plath and Christina Rossetti.